Wish you and your family a very happy and prosperous New Year! May this new year dawns with the promises of a brighter tomorrow. #HNY2017 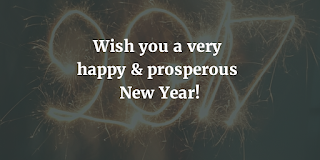 Popular posts from this blog

February 09, 2017
While preparing a manuscript with Latex, it is often useful to highlight the changes made in the current revision with a different color. This can be achieved using the \ textcolor command provided by Latex. For example, \textcolor {red}{Hello World} would display the string "Hello World" in red color. However, the final/published copy of the manuscript does not contain any highlighted text. Therefore, if a large volume of changes were made, it becomes tiresome at the end to find and remove all the individual portions of highlighted text. This can be circumvented by defining a utility command to switch highlighting on and off as desired. In the following, we define a new Latex command, highlighttext , for this purpose. The command takes only a single argument—the text to be highlighted.     \usepackage {color}    % For highlighting changes in this version with red color   \newcommand { \highlighttext }[1] { \textcolor {red}{#1}}   % Remove all text highlighting
3 comments
Read more

The ONE Knowledge Base

May 29, 2014
The Opportunistic Network Environment (ONE) simulator has become largely popular and widely used in research on DTNs and Opportunistic Networks. The simulator has an associated friendly community, where users can ask questions and get their doubts clarified. Indeed, the community is vibrant and its members are useful. However, there are two issues with this community. First, the archives of the community's mailing list are not public. This is unlike many other similar lists hosted using Mailman, which are public and, therefore, can be searched using Google. Hence, time and again people have asked the question -- how to search the email archives? The second issue is largely due to the first. Due to the lack of searching facility over the archives, often same question tend to be asked by the new users repeatedly. People here are patient enough to reply to them. But such necessity could be entirely discounted had there been a facility to search the archives. In particular, it w
3 comments
Read more

The ONE KB has a new home

October 12, 2017
The ONE Knowledge Base is now hosted at http://theonekb.pythonanywhere.com/ If you are unaware, the ONE KB allows you to search the old email archives of the simulator's community. Therefore, if you have any question related to simulation, you may query the existing database at the above link. Chances are good that your question might already have been answered previously. If not, you can still post an email to the community's mailing list. Have you tried the ONE KB already? How was your experience? Was it helpful? Let me know in the comments!
15 comments
Read more